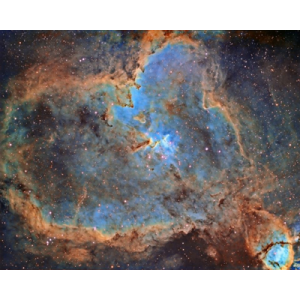 The Heart Nebula, IC 1805 in the constellation Cassiopeia, is 7500 light years in our Galaxy’s Perseus Arm. This emission nebula glows with gas and lanes of dark dust. Terry’s gem of a photo glows with gorgeous ionized hydrogen plasma and free electrons.

NGC 896, the brightest part of this nebula, is to the right and was discovered first. There is an intense glow of red light caused by radiation from a small group of stars at the nebula's center.

Melotte 15, the open star cluster scattered in the nebula, glows with star masses 50 times that of our Sun along with dim stars having only a fraction of the same mass. A microquasar was driven out of the nebula a few million years ago.